VTune Profiler is a popular performance profiling tool that targets both 32-bit and 64-bit x86 architectures. The tool collects profiling data during runtime and then either through command line or gui, provides a variety of options for viewing and doing anaysis on that data. VTune Profiler is available in both commerical and free options. The free download version backed by a community forum for support, is available here. This version is appropriate for detailed analysis of your WASM program. Note for jit support, Wasmtime only supports VTune profiling on linux platforms but other platforms are expected to be enabled in the future.

VTune support in wasmtime is provided through the jit profiling APIs at https://github.com/intel/ittapi. These APIs are provided for code generators (or the runtimes that use them) to report jit activities. These APIs are implemented in a shared library (built from the same ittapi project) which wasmtime pulls in and links to when vtune support is specified through the vtune cargo feature flag. This feature is not enabled by default. When the VTune collector is run, it links to this same shared library to handle profiling request related to the reported jit activities. Specifically, Wasmtime pulls in the ittapi-rs system crate which provides the shared library and Rust interface to the jit profiling APIs.

For jit profiling with VTune Profiler, first you want to make sure the vtune feature is enabled. After that, enabling runtime support is based on how you are using Wasmtime:

After profiling is complete, a results folder will hold profiling data that can then be read and analyzed with VTune.

Also note, VTune is capable of profiling a single process or system wide. As such, and like perf, VTune is plenty capable of profiling the wasmtime runtime itself without any added support. However, APIs here also support an interface for marking the start and stop of code regions for easy isolatation in the VTune Profiler. Support for these APIs are expected to be added in the future.

Take the following example: with VTune properly installed, if you're using the CLI you'll execute with:

This command tells the VTune collector (amplxe-cl) to collect hotspot profiling data on wasmtime that is executing foo.wasm. The --vtune flag enables VTune support in wasmtime so that the collector is also alerted to jit events that take place during runtime. The first time this is run, the result of the command is a results diretory r000hs/ which contains hotspot profiling data for wasmtime and the execution of foo.wasm. This data can then be read and displayed via the command line or via the VTune gui by importing the result.

Running through a familiar algorithm, first we'll start with the following wasm:

Profiling data using vtune can be collected a number of ways and profiling data can be collected to focus on certain types of analysis. Below we show a command line executable option using amplxe-cl, which is installed and in our path, to help find hotspots in our wasm module. To collect profiling information then, we'll simply execute:

Note again, wasmtime must be built with the vtune feature flag enabled. From here you there are several options for further analysis. Below is an example view of the collected as seen in VTune's gui with it's many options. 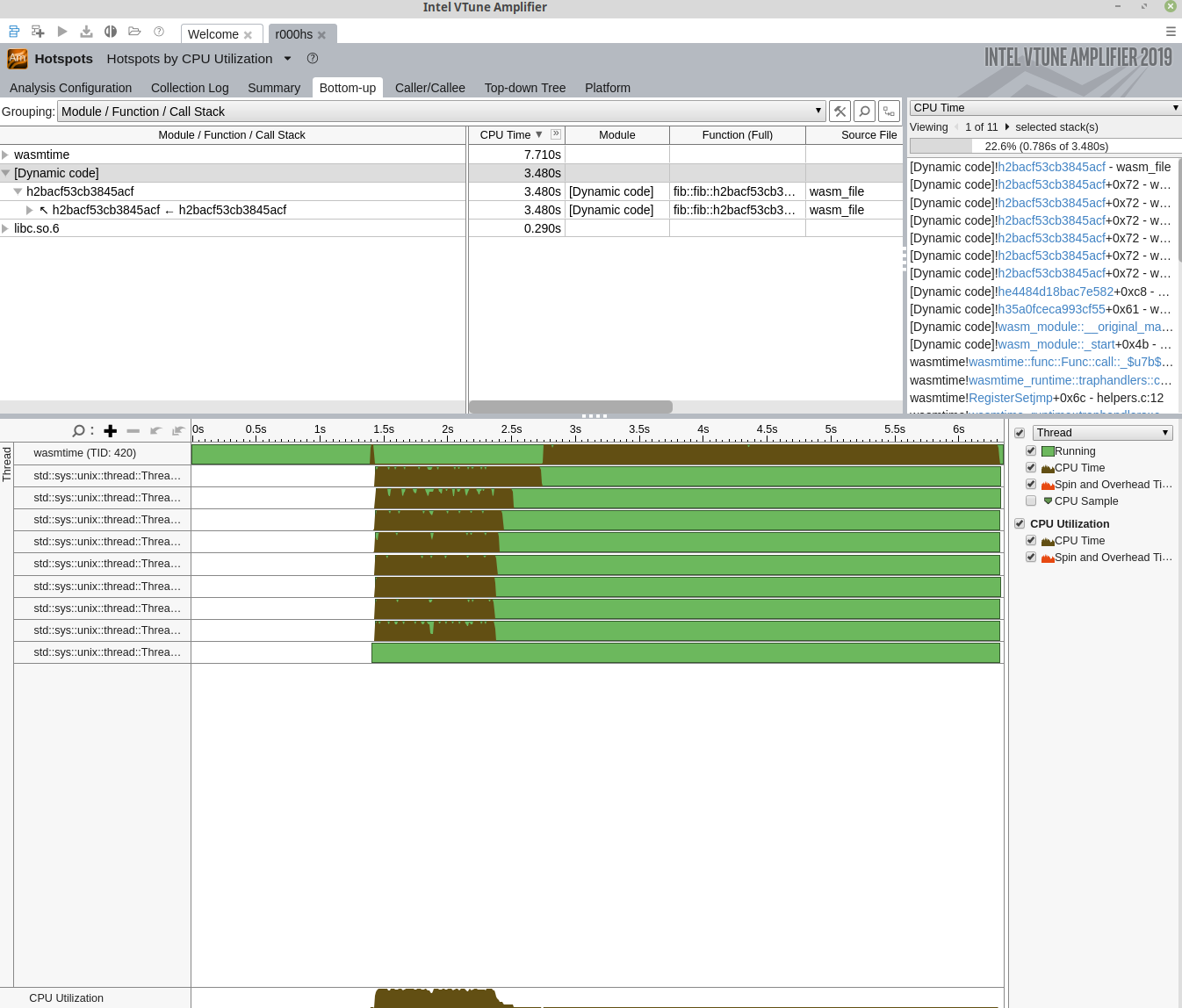 For more information on VTune and the analysis tools it provides see the docs here.