One profiler supported by Wasmtime is the perf profiler for Linux. This is an extremely powerful profiler with lots of documentation on the web, but for the rest of this section we'll assume you're running on Linux and already have perf installed.

Profiling support with perf uses the "jitdump" support in the perf CLI. This requires runtime support from Wasmtime itself, so you will need to manually change a few things to enable profiling support in your application. First you'll want to make sure that Wasmtime is compiled with the jitdump Cargo feature (which is enabled by default). Otherwise enabling runtime support depends on how you're using Wasmtime:

Once jitdump support is enabled, you'll use perf record like usual to record your application's performance. You'll need to also be sure to pass the --clockid mono or -k mono flag to perf record.

For example if you're using the CLI, you'll execute:

This will create a perf.data file as per usual, but it will also create a jit-XXXX.dump file. This extra *.dump file is the jitdump file which is specified by perf and Wasmtime generates at runtime.

The next thing you need to do is to merge the *.dump file into the perf.data file, which you can do with the perf inject command:

This will read perf.data, automatically pick up the *.dump file that's correct, and then create perf.jit.data which merges all the JIT information together. This should also create a lot of jitted-XXXX-N.so files in the current directory which are ELF images for all the JIT functions that were created by Wasmtime.

After that you can explore the perf.jit.data profile as you usually would, for example with:

You should be able to annotate wasm functions and see their raw assembly. You should also see entries for wasm functions show up as one function and the name of each function matches the debug name section in the wasm file.

Note that support for jitdump is still relatively new in Wasmtime, so if you have any problems, please don't hesitate to file an issue!

If the jitdump profile doesn't give you enough information by default, you can also enable dwarf debug information to be generated for JIT code which should give the perf profiler more information about what's being profiled. This can include information like more desriptive function names, filenames, and line numbers.

Enabling dwarf debug information for JIT code depends on how you're using Wasmtime:

You shouldn't need to do anything else to get this information into perf. The perf collection data should automatically pick up all this dwarf debug information.

Let's run through a quick example with perf to get the feel for things. First let's take a look at some wasm:

To collect perf information for this wasm module we'll execute:

And we should have all out information now! We can execute perf report for example to see that 99% of our runtime (as expected) is spent in our fib function. Note that the symbol has been demangled to fib::fib which is what the Rust symbol is:

Alternatively we could also use perf annotate to take a look at the disassembly of the fib function, seeing what the JIT generated: 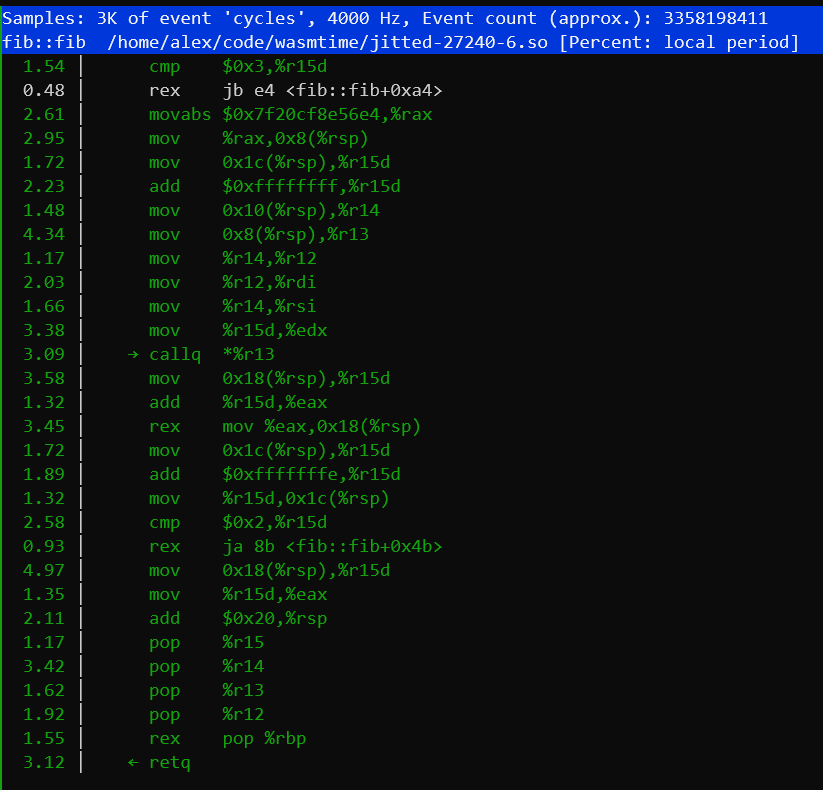